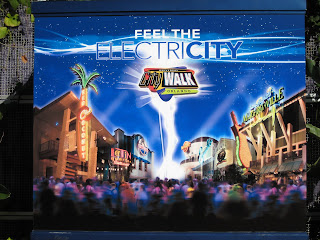 Decided to leave the camera home for a change last night and just go have fun at CityWalk. A lot of people leaving Universal Studios from the Blondie concert apparently stayed on at CW because all the clubs were packed to the rafters. It was difficult to move inside The Groove and the Red Coconut. Partiers were tossing beads from the balcony above Pat O'Brians. I did not go into Bob Marley's but the line to get in had at least 50 people in it. A free live band was playing on the center stage. DJ AJ at The Groove played mostly hip hop and mashups. And looking up at the booth in RCC it looked like DJ Smooth from RadioDanz.com (and formerly of XM BPM) spinning a similar mix. Went upstairs and sure enough, that was him. Another big name in the DJ AJ stable of disc jockeys! Smooth is also doing Sunday nights at The Groove and I hope to check that out soon.
Posted by Save Pleasure Island at 10:39 AM

that is the DUMBest sign i have ever seen!!! I call that place SH*TY walk. but with PI gone what else is there oh ADH?

Nice seeing you and the wifey last night Robert...

ADH was closed last night so a lot of the people that hang out there were at CityWalk. In the near future I plan to do an article comparing CW & PI.

Mark, quite the surprise seeing you all at CityWalk last night!

I know but the parking is not very safe!? and i do NOT like going to clubs downtown! and don't know any bartenders there!