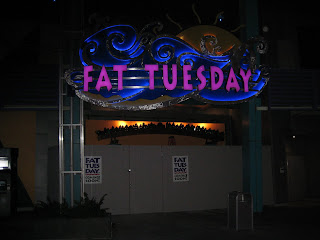 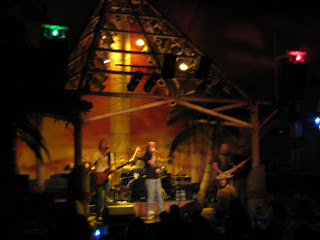 CLICK ON PHOTOS TO ENLARGE
At CityWalk I was excited to see that the sign for the new Fat Tuesday frozen drink bar has been installed. Really looking forward to those Slurpee/Slushee-type frozen alcoholic drinks! This should be open for spring break. But the rest of CityWalk was rather bleak last night as another cold Orlando night kept people at home. The band Blue Stone Circle played to a small crowd at Margaritaville but any dancers stayed seated. 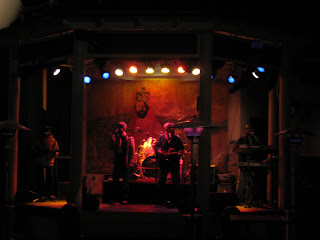 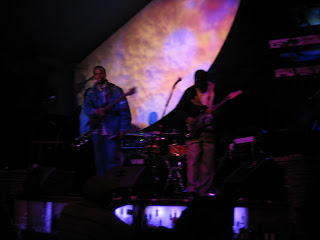 The band Mystik NRG played reggae but only about 10 people watched in the cold outdoors of Bob Marley's. Even the popular Herb Williams Band over at Red Coconut Club had few onlookers. The Groove had a light crowd for 80's Night but more people than the other clubs with the exception of Latin Quarter which was very dead early but got crowded after 11:30pm. I think the biggest crowd in CityWalk though was actually at AMC Universal Cineplex for a special advance screening of The Wolfman! Tomorrow night Heart is the concert band for Mardi Gras in Universal Studios. And the after-party will be in CityWalk!
Posted by Save Pleasure Island at 7:29 PM

Fridays generally suck for techno. So no, not really

Hey KingBob, were you wearing an orange hoodie last night??

No. I forgot to bring ANY jacket and was freezing my ass off!