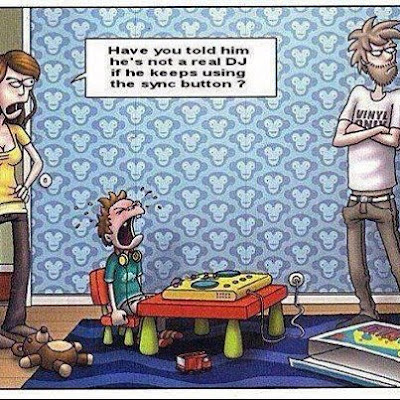 Posted by Save Pleasure Island at 7:05 AM

the comments about Djs using software programs that contain a "sync" feature such as Serato Dj are getting old. It's called progress; deal with it. And for the record. The sync feature in Serato Dj syncs the tempo and that's it. It does NOT automatically put tracks on beat together or anything like that. You can have two tracks playing at the same tempo courtesy of the "sync button" and still have a train wreck if you don't know how to mix. For mobile Djs, the modern controllers are gift from the heavens and they just happen to have "sync" buttons and come built to work with software that has a sync feature; so what.

It's not practical to go lugging turntables around everywhere just to prove to people that we can "mix" because we're using vinyl. Lay off the "sync" button thing. Find a new topic to pick on.

yeah it sure DID! just proves HE/SHE can not MIX for real! and OH if you are good enough to MIX/Play you might keep a JOB! in the same place and leave most of your stuff there! and lock it up in a "safe" place!
again If I was a club owner I would not pay u all that much to DJ in my club Because I can all ways find a CHEAP dj somewhere! funny how there r DJ"S EVERYWHERE now!

OH BTW!! MOVING ON! respond if you like but I am done! so u can complain more if u like! LMAO.

PS I would love to dj to prove HOW I can dang near keep up with...... and MOST people will not care about the small differences.

Boys, boys, boys, it was just a funny cartoon. When I was at Electric Daisy Carnival - Chicago a few weeks ago some of the top DJ's in the world were playing off laptops! And those playing straight off CD's probably pre-mixed whatever was on the CD on their laptop earlier.

"Because I can all ways find a CHEAP dj somewhere! funny how there r DJ"S EVERYWHERE now!"

Bob, the next time you do an article on why downtown clubs suck so bad, please be sure to reference this line of thinking. This is precisely the reason why you have 20 year old kids downtown that have no library and no idea what they're doing and clubs failing left and right.

Apparently a lot of the managers/owners down there are as clueless as whoever posted this comment on your blog. The classic saying applies here; you get what you pay for.

Mannequins empty on a Thursday? Boston?

I think bars and clubs fail "left and right" because that's the nature of the business. A place can be popular one day and old news the next. There are a number of places downtown that are packed with people yet the place holds zero attraction to me and I don't get why anyone else would either. And there are some places that I think are really good yet they stay empty.

I can vouch that EasyEddy is no troll. He's a long time reader and commenter here on the Blog. I can't vouch for his taste in music though, lol! Thursdays at Mannequins ft. DJ Dave Cannalte were definitely not empty nights there since CM's got in free.

Yes, clubs come and go for a variety of reasons but the music played in a club is one of the first things a patron experiences and it has a huge impact on the club.

One of the fastest ways a manager/owner can f**k up his/her club is to hire some 20 year old UCF student that doesn't know how to read a crowd, doesn't have a DEEP library and doesn't know how to use his/her Dj equipment, even if it does happen to have a "sync" button.

Sorry but there is just no getting around the fact that you need REAL experience in a Dj. Someone who's been in a game for a long time and has the experience and skills to back it up.

And these Djs don't work for a bar tab.

Quick Question? I thought you where going to DELETE name calling comments?
thanks fro your time!

Hate speech and advertising gets deleted. The term "troll" is a standard internet term for someone who posts a Comment that is only designed to cause controversy. I don't think what was posted here rises to that level but use of the term was fair as well.

OK but one person in past (no NAMES) was calling an other person a troll! as I recall he said get this troll off of here! or something like that!

I see that as NAME calling at the time! but this person as I saw in past has gotten a pass! or should I say looks to me as BIAS!
just sayin!
I will say the name if you say I can but it might set this person off?