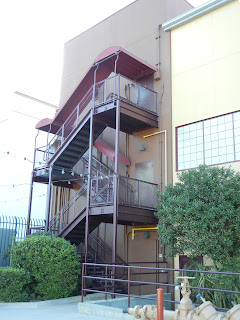 One of our sources is telling the Save Pleasure Island Blog that Downtown Disney Operations Management is moving their offices into Mannequins Dance Palace.  Not a lot of information with this nugget  so we're left to surmise that they're moving into the vacated back stage offices that already exist rather than moving into the club section of the building itself.  You may recall that inside the club, southwest corner doors led backstage to a "cast member only" area wedged between Mannequins and 8TRAX.  The photo above shows exterior access stairs to those offices. 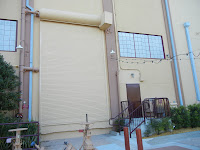 But what about the club itself?  Apparently unrelated to the story above, two different people last week posted on an internet bulletin board that supposedly a tenant is now lined-up for the MDP space!  Neither had knowledge of what was coming in.  The space is huge and ill-suited for anything but a dance club. It could potentially house a restaurant too with a lot of work.  A couple years ago the Blog published information that Minneapolis-based Schussler Creative was behind plans for several new restaurants on Pleasure Island.  Among the names mentioned were a Winter Wonderland Restaurant including a Polar Ice Bar and Orange County Choppers BBQ. See these archived stories from 2009 and 2010.

Just a couple weeks ago Blog roving reporter William reported that the controls for the large overhead door on the side of Mannequins had finally been repaired.  A reader commented about walking by the door around 1pm a few days later and the door was open with workers inside. And now we hear there may be a tenant.  Things appear to be happening at Mannequins....good or bad!

Posted by Save Pleasure Island at 6:51 AM

With management offices moving to MDP this would allow for the demolition of Adv Club and Soundstage which are directly connected to the underground current offices. Not saying for sure but thats my speculation.

Why would this have anything to do with removing the Adventures Club and BET? If anything that leaves those buildings ripe for repenting as their intended purpose, or perhapse with BET as a new Adventures Club restraint attached to the Club!

Bradley, I had assumed that whoever was moving IN was moving OUT of those trailers in front of PI. But your theory makes a lot of sense.

Anon, when BET and AC were stripped no one needed to vacate the offices that are under Celebration Plaza. So if they did plan to refurb the existing structures, no one would need to vacate either. Bradley's theory above seems more plausible.

When I worked DTD when Pleasure Island was alive and well the building in the front of DTD was security and wardrobe. Under Celebration plaza was a break room and offices. Also a dumpster but that probably could still stay. Though with offices moving IDK where that leaves the breakroom in all this.

Finally, hopefully someone is going fix up Mannequins and 8Tax.
Also Hopefully B.E.T. and Comedy Warehouse as well.
Come on new tennants, who ever you are, make a lot of us
Save P.I.ers happy, because four years is long for P.I. to be closed up.

now wait a Minute I thought the big side door was working Like someone said if u had the guts (or how ever they put it) to go open it! it would open!! NOW some one claims that is just got fixed? HMM sounds like some bad INFO!?!?! so now what are we to think about the floor in Mannequins being there?

I'm not going to answer that because the timelines are clear to everybody else but you. I continue to provide accurate and breaking information for this blog and my record speaks to that. I don't have time to deal with people who do nothing but try to start shit on the internet. Go back under the bridge where you belong.

The door was fully operational TWO YEARS ago when we published photos of the inside of Mannequins, post-closure. Most recently the Close button was not operational but that is now been repaird.

And yes, the revolving floor in Mannequins is still in there. Geez.

If I had to guess.. they are moving out of the office under the hill and perhaps getting ready to get rid of the hill 100%, as it simply does nothing but screw up the traffic pattern.. Or perhaps, get rid of the hill, the bridge, connect the whole west side and PI, new pathways...

Who knows.. frankly whatever they do, it's prob not going to work, since TDO has a problem spending the money needed to fix this correctly VS Disneyland CA, were they pour money like water into fixing things (See DCA)

Foot traffic has to go that way regardless of the hill. My understanding of the demolition, if it takes place, is that seed & mulch would replace BET Soundstage and Adventurers Club but that the offices under Celebration Plaza would remain. I don't think there are any plans to eliminate the fact that PI is an island, regardless of what they call it.

funny you have no idea? ZULE! I was saying wait a min! I never saw when and what time line it broke? just that someone claims you could open it but now it WAS broke?
you claim accurate? HMM LIKE someone said RUMORS. mostly! but YES only you Zule you everthing! and you can never be wrong?
cruising on here shows your intelligence! saying "Go back under the bridge where you belong" shows how mature you really are!
I have never told you anything like this. or cruised at you!

All speculation my peeps. Keep guessing!

Anon @ 10:07 NO NO Zulemara knows all!!
I know I know I was Brought down to his level for saying this! but again HE knows! and is never wrong so listen to him!

Pathetic that Disney freaked out and closed a money maker like Adventurers Club without a plan to replace it. Four years gone, and what? I'm glad to give City Walk my money.

Thank you for the update. This is the best source of info for my yearly search for "has WDW done ANYTHING with PI yet?!"