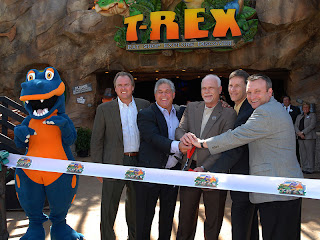 I've heard again that 3 of the new venues on Pleasure Island are going to be from Schussler Creative ideas; possibly by the Landry group. Schussler is same creative force that brought T-REX and Yak & Yetti to Disney. Look for Orange County Chopper's America's Roadhouse (bikers, blues, burgers & bbq), Hot Dog Hall of Fame (frankly the best hot dogs, sausages, dumplings & french-fries in the world) and the Polar Ultra Lounge (ice bar). I still think bolting some motorcycles onto the revolving dance floor and letting people ride them around the room is a great idea! Once again though, unconfirmed rumors.
Monday Update: In this weeks edition of The Walt Disney World Update on the MousePlanet website, author Mark Goldhaber states the following: …Steven Schussler (creator of Rainforest Cafe, T-Rex and Yak & Yeti, among other concepts) has teamed with Orange County Choppers and Levy Restaurants (operators of most of Schussler's creations) to open a new concept restaurant themed to motorcycles with barbeque cuisine. Could Backfire BBQ end up coming to Walt Disney World? Uncertain, as it may cause conflicts with existing Pleasure Island tenant Harley-Davidson. Very close to what I published yesterday!
Tuesday Update: Readers should click on my September 16th article and read about the meeting Disney and PI officials had with Schussler in May, 2008. The following month Disney announced that PI clubs were closing! Coincidence? You can click on September over to the right and scroll down to September 16th.

Posted by Save Pleasure Island at 3:49 PM

Disney can pretty much forget about me and my parner coming to Orlando anymore for vacation, we're going to keep going south to Miami and Key West. Seeing the mouse doesnt care about families without children anymore.

And I don't understand that. They created PI because so much money was flowing off-property.

Disney isn't just about families. Many guest are singles, many guests are couples without kids or with the kids back at home. Some guests have the kids with them but they get a babysitter and want a night out. Disney markets itself to meetings and conventions.

All these people want nightlife options and they want it on-property. Yet they've been given very, very few options.

It is just gross. As a local I am disapointed. There are so many things for adults in Orlando but the one specific thing on Disney Property for Adults they beat in to the ground! I used to hae an annual pass to PI when I was 21. I have AMAZING memories from that place. Now I see it as a huge eye sore. Orlando does NOT need any moore themed flipping food places! Honestly we have plenty! We need GOOD night life! Why dont they get that???

Thanks Princess Aurora for your comments and for visiting my Blog. We just have to wait and see what happens!