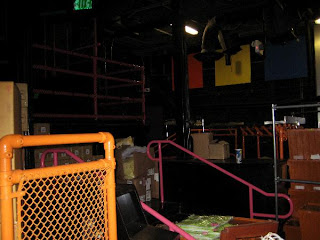 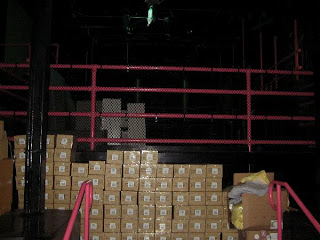 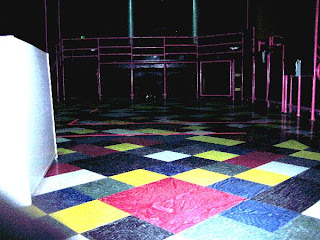 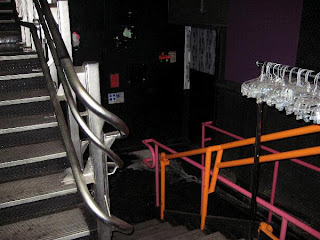 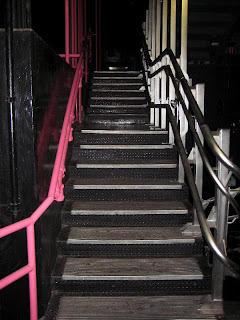 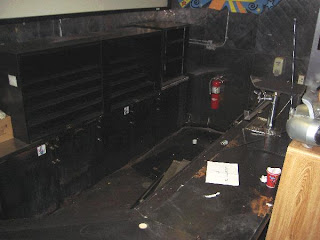 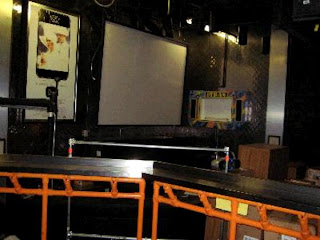 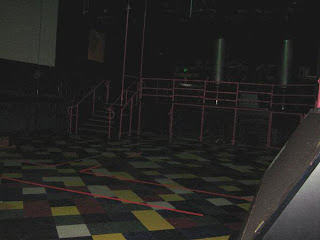 CLICK ON PHOTOS TO ENLARGE
You know how every once in awhile you see a story in the news where excavators are doing some digging and they discover an old house buried in ancient times by a volcano. And everything in the house is exactly as it was the moment the volcano blew. Well that's kind of how I feel looking at these 8TRAX interior photos. You see, it looks as though the club is standing still in time, appearing as it looked that fateful night over two years ago when it was closed and locked-up! Bring in some lights, bring in some tech and sound equipment and bring in some elbow grease and 8TRAX could reopen this weekend!

As you can see for yourself, not much has changed. It looks like the place is being used for some sort of merchandise storage in the lower area. But the dance floor looks the same. And contrary to a rumor I published a year or so ago, that downstairs bar was not removed; you can see it's still there! The 8TRAX sign appears ready to list some drink specials. The Great Gatsby poster reminds one of better times.

Come on Disney, let's reopen the place! That 70's music is cross-generational; it meets your very own definition of family friendly. It returns night life to Walt Disney World and a $5 cover charge brings a long line of patrons back up the Lombard Street stairs! It brings a whole lot of people back to Pleasure Island.
Posted by Save Pleasure Island at 10:28 PM

Disney has made it pretty clear they don't want to bother with the work involved in running a club. They'd rather just continue operating DTD as an outsourced shopping mall. Bring on the Claire's and the Hot Dog on a Stick.
I won't go there, but I'm sure some fat ugly tourists will love it.

OMG! Those photos do bring back the memories!!! I'd almost lost faith but seeing those pics really hits home - that it would not take much to bring it back. I'm still doubtful that they will but I will join the charge to shock WDW folks into making it happen. Oh, to walk in there one more time. I might even pay $20....

Thanks for the photos KB!

Surprised to see the video screen still up. Why was there one behind the bar?...don't remember that one. BTW can you still go down the Lombard promenade?

Yes, they want to outsource the whoe thing but to me that does not preclude an outside operator from reopening 8TRAX.

Yup Jeff, good memories in there!

I too was surprised to see the video screens still up. Some of the songs they played had music videos to go with them, which played on television monitors as well as those video screens including the one behind he downstairs bar.

I know no one will tell but would love to know HOW someone got these shots?

This would be a good sign perhaps.
It's been two years since
8Trax & Mannequins have been closed, so let's put the lights on fix, up the dance floor, and put some "Spit and Polish" on them.
P.S. We're glad to see that
8Trax might be coming back.

funny how some "reads" more than what is there!
some how someone got these pics! this does NOT mean any PI club is reopening!

That's correct. Obtaining these pics in no way indicates 8TRAX is reopening. It merely indicates that 8TRAX is still inside there.

there is no sound system, lights, dj equipment, fog machines, drinks! and people so I would say that is NOT 8TRAX
there just an empty shell! with out all of this stuff it's not really 8TRAX now is it?

That sign inside says 8trax! So it must be!

We all know that 8-Trax is not re-opening. Just the fact that we saw some interior shots brought back so many memories of the good times we all had there. Disney has no intentions of bringing back the magic it once had. I always had a GREAT weekend when I was at PI. Met so many people and enjoyed the tourists. Its a shame that we cannot have that back, but times do change and its time to move on. KingBob, I do still have a "little" hope that maybe someday Disney will change their minds. But I don't want to sit here contemplating when. It hurts. Thanks for sharing these photos. And lets hope that Disney does re-open at least Mannequins and 8-Trax. Then, Downtown Disney will live again.

I used to work at the missing link sausage company across from 8-Trax. I worked the 8-Trax door a few time. I'd love to go back inside.

Hope springs eternal, and I frankly I agree.
Keep hanging in there all you Save PI'ers.
Let's open up the clubs and get some night life down in PI.
Light PI up and let it rock!!

Suck it Disney, you will never get another dime from me. PS I short your stock all the time.

These pictures really hit home. Postings like this are why I come back to the blog. Always a chance really scaled down PI, keep the faith.

i pulled the most amazing girl in 8 Trax

Donnie, I used to enjoy Missing Link around 1am for a load of hot french fries to soak up the alcohol before heading home!

Tightglove, I recall you're primarly an 8TRAX fan. A tiny sliver of hope remains!

Anon yesterday at 3:25pm, that same girl keeps telling everyone that she pulled YOU!

I hope so Bob,she told me she loved my English accent :)

An English accent will sometimes get you an Orlando girl. But those Scottish guys with the kilts gets them EVERY time!

Yea that was one of the best vacations I had to Disney World!! I loved all the clubs, but 8 Traxx was definitely THE BOMB!! It was a free flowing party place, with hot women everywhere! The vibe in the atmosphere was absolutely great. That was one place I didnt mind spending $12 a drink on because it was so worth it. BRING BACK 8TRAXX. I would go back to Disney just for Pleasure Island. By the way, I googled it, and there is a Club 8 Traxx that opened in Buckhead Atlanta.

Will have to check out the one in Buckhead.

I still miss it so much. Would pay almost anything to have another night of fun at 8 TRAX. Nothing else will do.

Keep an eye out for an hour of 8TRAX re-created at Atlantic Dance Hall Thursdays, supposedly coming soon.