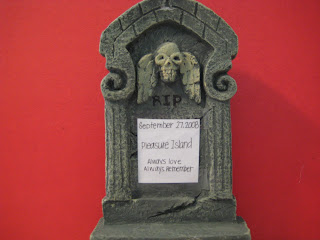 Two years ago tonight, Pleasure Island met it's untimely death. With the clubs closed, the Island became a virtual ghost town at night and it forced Disney to reopen the PI Live DJ Booth. That morphed into the Celebrate Tonight fiasco which was finally axed in favor of the current PI Ultra Lounge concepts. This too is just temporary as Plan B is developed, we hope. The travesty in PI's death is that all the clubs shuttered that fateful night remain shuttered; the only thing new on the Island in two years is a restaurant that was coming anyway. And a once-in-awhile hot dog cart. Rest In Peace, Pleasure Island. You are missed by thousands.
Posted by Save Pleasure Island at 12:14 AM

WOW, 2 years already....unbelievable! I fell like it was just yesterday, with the floor moving under my feet at Mannequins with Dawn and Gordo at the bar.... doing the Electric Slide at 8 Trax with Diana and Taryn at the bar.... laughing at the Comedy Warehouse, getting sucked into the shows at The Adventure's Club, doing the Cha-Cha Slide @ midnight at Motion, and drinking buckets with straws at The Rock-N-Roll Beach Club. I know, they are just "memories", but the BEST memories ever! And, I know...even of they reopened a couple of clubs, it would never be the same...but a glimmer of happiness would still come over me. We went down to Paridiso last week just to visit the island...After a couple of drinks we walked around just remembering everything that the island used to be, all the great times we had, the "West End Stage", the "Explosion Dancers", the ever changing club scene... THANK YOU PLEASURE ISLAND FOR EVERYTHING!! As long as there is a glimmer of hope, there is always a chance.... (even if it is only a club or 2...open the doors...the island is quite a "depressing" place without the "inside" entertainment...)

the patrons were the ones that made pi...what pi was

I definatly agree.
Hopefully Plan B will open some clubs.

I still say it would be a HUGH slap in the face to reopen one or more clubs with the original names!
now if they opened a club or 2 with a new name maybe I would go check it out but still will NOT spend any money on Disney property!

It's incredible how much money we no longer spend at WDW. Six to seven weekends per year, at least, staying in Deluxe resorts, eating pricey meals, enjoying spa treatments... not because of the theme parks... all because of Pleasure Island and the incredible clubs that used to be there.

Say what you want about Michael Eisner... at least he understood that WDW was not just a destination for children. And yes, I have two young kids. But there are times adults with kids want to spend time together as... adults. And PI used to fill that need.

Now we spend that time and money somewhere else. Happy now, WDW?

Virtual Toad.... Preach on! I do not have any kids, but we used to spend the time at the resorts also (Old Key West was a favorite!) and maybe do a park or atleast have dinner at a resort (Ohana's @ Polynesian was a favorite) before we went to the Island. Pleasure Island was always a great escape from the kids and the parks. I can't think how many people over the years that we met at the clubs that were just so "Thankful" for the Island and the time they could spend as a couple rather than just as a family "unit"! It's just a shame.... Well, I have been spending my money at the Hard Rock @ Universal and using the restraunts and clubs @ City Walk. They are NOT the same, but still alot of fun! We can still have our time at their parks, eat at their restraunts, drink at their clubs, and use their transportation to get back to the resort. Sorry WDW....we still love you and miss the island, but Universal seems to have "everything" we need and want in a vacation (even if it is only for a night or two....)

Here's the "opening" show from Mannequins...

I will never forget! that Disney Didn't try to keep PI open!
oh yes the good times as well! but most fresh in my mine is the fact of the way it was done!
and your youtube link is the reason! thanks! zulemara
you made my point more valid!