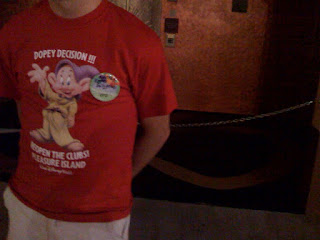 Back in August of 2010 rumors about Pleasure Island were plentiful with lots of sources feeding the Blog's appetite for news. It's interesting to look back on some of the stuff we printed back then (in black) and what actually happened (in red).

RRBC: Latest rumor was that it was back at the top of the list to be demolished. Once down, a lighthouse style bar and restaurant would be built on Village Lake. Rumor is that it's coming down this October. RRBC did actually get demolished, although several months later than predicted here.  And that rumor of a "lighthouse style bar and restaurant being built in its place was 100% accurate!

MOTION: Continues to be available for rental as a banquet facility and dance club. Not used very often though. No new rumors. Old rumor was that it will be torn down so that a new main walkway from Downtown Disney Marketplace can be routed through there. However, as it is the only facility with a kitchen and given Disney's desire to put in 3rd party restaurants, would they really demolish it? Yes, they did demolish it and it was the first to go. And in it's place came a new main walkway for pedestrians.  100% accurate.

ADVENTURERS CLUB/BET SOUNDSTAGE: Although they don't look like it, these two venues were in the same building. Someone recently stated that artifacts were being reinstalled onto the wall. That is absolutely not true. One of our sources was inside AC last week and there is nothing new on the walls. Source says only things remaining inside besides the chandelier are the Yakoose, Babylona and Zeus. I've already reported that a new AC will be built as part of a new Land at Disney's Animal Kingdom. I've heard nothing further regarding that information. As for the current AC/BET building, it may be coming down in October along with RRBC and some rumors put it coming down before RRBC. A new Adventurers Club at DAK never happened but who knows what the future holds.  The BET building did get demolished but not until years later and of course the AC building remains standing but heavily renovated as The Edison. 50% accurate.

MANNEQUINS & 8TRAX: We know these are in one building as well and that the power grid for the entire island is located here. So this building can't be demolished. As you likely saw, someone in the Comments section of Saturday's PI Update article is reporting that these two clubs will reopen next year. That would be incredible if they really did but don't hold your breath. This past January one of my other sources was inside Mannequins and found that the revolving dance floor appeared to still be in there. But other than that new rumor, there are zero rumors about these venues except that they were declared "off limits" according to one Island employee. We were right about them not being able to demolish the Mannequins / 8TRAX building and about the floor still being in there. They never did reopen though as clubs and we know now what finally happened in there!  50% accurate.

COMEDY WAREHOUSE: The rumor a few weeks ago was that a level floor was going to be installed so that the upstairs could be made available for retail. A rumor a few months ago was that comedy was returning to the Island. So there was some hope that CW would return. I have no other information. Comedy Warehouse has returned several times as special events elsewhere than Downtown Disney.  The CW building was demolished.  0% accurate.

We're only as good as our sources and I think we did pretty well in hindsight.  And so we carry on until Mannequins dance floor spins again!
Posted by Save Pleasure Island at 7:00 AM