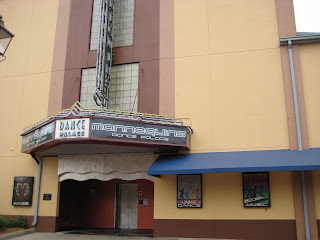 Downtown Disney officials confirmed in a press conference early Thursday evening that the former Mannequins Dance Palace night club is going to be converted into a revolving International House of Pancakes restaurant slated to open by December, 2011. According to Downtown Disney Vice-President Keith Bradford, this will be the first IHOP ever on-property and first revolving IHOP in the world. He called it an exciting new addition to Pleasure Island.  "Surveys continue to show that our Guests want more restaurant options when visiting Walt Disney World and there has been in particular requests for something open 24/7. We listen to our Guests and are thrilled to be able to offer this option."

Describing the upcoming renovations, three sides of the building will have mostly glass walls to give diners an extensive view outdoors as the central area of the restaurant completes one full revolution every four minutes. "Evening diners will be able to view the dancing fountains in Village Lake as well as activities at the waterfront Amphitheater."  "The thousands of lights that transform the area into an electric wonderland will be fully visible," he said. Likely to become a tourist attraction in its own right, the IHOP will feature Mickey-shaped Belgian Waffles. When questioned about his reference to Pleasure Island, Bradford conceded that when they learned that the cost to replace that huge Pleasure Island sign on top of the Mannequins building alone was over $8 million, they decided that there was no real need to change the name to Hyperion Wharf.
Posted by Save Pleasure Island at 12:05 AM

LOL! You shouldn't have given away the joke until much later today when there would have been thousands of upset comments. Good one man!

very funny!
I know that ZULEMERA when read this is saying I TOLD IT WAS STILL THERE!!! or wanted to say!!! LOL
HA HA HA HA!!! love it

King bob is insane i did enjoy this reading!!

Thanks for the laugh to start my day.

I'd bet that Disney will take your "April Fools joke" and turn it into reality....they are that dumb.

I got the April Fools joke...but it would be nice to have someplace "on property" that was open 24/7...I'm always hungry...

It wouldn't surprise me to see them actually stick something that lame in there!

I'm glad to know that this was a late April fool's joke.
Now that we've all had our laugh come on Mr. Bradford lets get down to serious buisness and fix up the night clubs, because from what I can gather lot's of people want Party Hardy!!