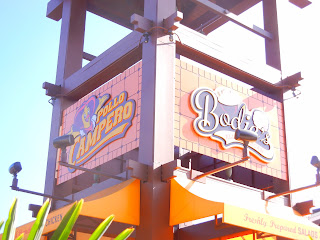 Over on the WDW Magic website a rumor was recently published about a new California Tex-Mex restaurant coming soon to Downtown Disney and that supposedly it would be located "near" T-Rex Cafe.  Supposedly Disney chefs were holed-up in a test kitchen inside the Disney Port Orleans French Quarter Resort, practicing recipes for fish and shrimp tacos.

Well the only place that's near T-Rex is the building that used to house McDonald's and currently is the home of Pollo Campero and Bodie's All-American Hamburgers.  I've eaten there many times and I've never seen the place as crowded as McDonald's nearly always used to be.  So if the rumor is even true, could this be the location?

Sometimes Disney maps give away information ahead of any announcement.  You may recall a few years ago when the Blog published an article pointing out that Celebrate Tonight, the not so entertaining entertainment show on Pleasure Island was no longer listed on the Downtown Disney Guidemap.  Castmembers were surprised but knew nothing.  About a month later they announced that the show was ending.  Pollo Campero is still on the Guidemap but interestingly, take a look at the Downtown Disney map on Disney's website.  Every restaurant, store, kiosk, bathroom, ATM, etc. has it's own interactive little blue bubble.  Except for Pollo Campero/Bodie's.  Why not?  Amid the rumor, kind of makes you want to go hmmmm.
Posted by Save Pleasure Island at 7:00 AM

It shows up for me on the map you linked. Were you looking in the right place?

Thanks for the report. Pollo Campero now has a blue bubble. It didn't when the story was published.