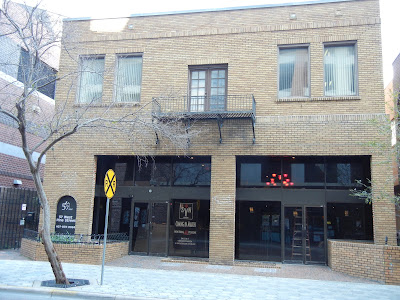 In last Wednesday's Downtown Update article, we reported that SYN Nightclub would be opening on March 1st at 57 West Pine Street.  The club was advertising (and still is) that they will be changing Orlando nightlife forever.  The opening unfortunately isn't going to happen this Friday...they're getting close though.  SYN Nightclub will be occupying the ground floor of the building pictured above, apparently with some second floor VIP accommodations overlooking the action.

But there is some other SYN news that has me excited!  According to their website, "SYN will be the delivery mechanism by which high energy vocal house music will be pounded into the Orlando Club Scene". That has me excited!  Ever since Bliss Ultra Lounge ft. DJ Mickey Bono closed and relocated to Loft55, there's been a dearth of Vocal House/Dance in downtown Orlando. There's lots of Progressive, lots of Breakbeats, lots of Dubstep, but none of the music that is the whole reason to begin with why EDM is so big now.  SYN is advertising that they're going to do it.  And if they do, and if they promote it right, and if they have top local DJ's, they really will change Orlando nightlife forever!  Bring it on!


Posted by Save Pleasure Island at 7:00 AM

Hope they hire Mickey Bono to DJ there! Bliss was the best spot for hearing great vocal house music and dance remixes!!

I try to listen to Bono's mix show on Radio Dance every week. He is good.

Off Limits ended up opening in the former Mr Sisters space. One of our readers reports that the place has been "dark" recently so we're not sure if they're still in business or not.