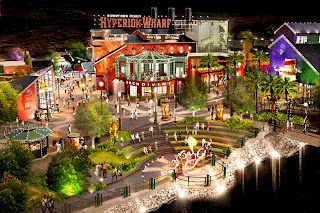 When Pleasure Island club-building demolitions and improvements were put on hold last year, we weren't sure if the Hyperion Wharf concept was simply being postponed or actually cancelled. But sources are now telling the Save Pleasure Island Blog that Hyperion Wharf has indeed been cancelled, to be reworked into an entirely different concept. We're told that third-party merchants and others at the Boardwalk complained loudly when the Hyperion Wharf concept was first announced, arguing that it was too close to what the Boardwalk concept was already offering.

Quite true. Here is how Disney described Hyperion Wharf when it was announced: "The district will come to life with a nostalgic yet modern take on an early 20th century port city and amusement pier." Here is how Disney currently describes the Boardwalk: "Disney's Boardwalk is designed after boardwalks that were famous during the turn of the 20th century." Apparently there is agreement that Disney World doesn't need two of the same thing and that it would create Guest confusion. So HW is finished.

Now that Hyperion Wharf has been canceled, it seems that things are turning in our direction.
Maybe these third party merchants may be able to give Pleasure Island the support it needs, to reopen the clubs, light P.I up and, start the party again.

not goin to happen! sorry to say! the PI as you knew it will NEVER be again! it would be SAD IF IF IF they reopened a substandard PI at best 1/4 of what it was would just be sad! would you REALLY want this? I ask you?

I would. Let 3rd partys reopen some of the clubs, each with their own admission price. Substandard compared to the old PI but each club could still be great based on what investors put into them.

I would too! Let any part of the island live on!

Once again...something that should have come up during basic due diligence, before any announcement was made to the public. How does management keep their jobs with this white elephant???

I completely disagree with this post all together.
WDW is now working almost 24/7 to bring the Seven Dwarfs Mine Train to the new MK Expansion. Meanwhile not 50 steps away is the already existing Big Thunder Mountain - a same concept roller coaster.

I don't think this has anything to do with HW or WDW concern with conflicts at the BW or any other part of the property.

This is all about who is willing to pay the price. And, due to current "media" reports, it is not the time to invest in these ventures.

But, that is why the former Virgin Mega Store still sits vacant and the former AC and MDP sit empty.

When is the last time you strolled down Main Street in the MK? There used to be places to sit and watch movies for hours. Now there are nothing but gift shops and places to purchase things.

They just want money! And they are making that money off of men and women with 2.3 kids not nightclub patrons.

And, until they will be able to make the money they want at DTD off of 2.3 kids and the occasional drop in by the adult members of the crowd who manage to break away for a few minutes to sneak in a drink, nothing will change at P.I. or DTD.

Cheers where you can find it and long live our memories of P.I.

FYI to Jeff... Disney announced in July 2011 that the old Virgin store would become Splitsville a 50,000 square foot 31-lane retro bowling alley that will also feature billiards, dining, dancing, and an outdoor patio. It's scheduled to open Fall 2012. While I'm not personally thrilled with an upscale bowling alley, it will be occupying that huge building.

Frankly, I don't much care what they do with the rest of the island, as long as it includes re-opening the Adventurers Club.

As a couple who visit Disney from the uk every other year I would love it if p.i. Brought back just a few of its clubs. We travel to Universal City Walks for a bit of nightlife now. even if they brought back the Adventurers Club and the Comedy Store that would be a start!

"But, that is why the former Virgin Mega Store still sits vacant"

Have you not been there in a while? They've been building a Splitsville there.

God I hate Disney. They ruin everything they touch. They won't be happy until all of Orlando is turned into one big huge Disney channel clone. That rat is a control freak.