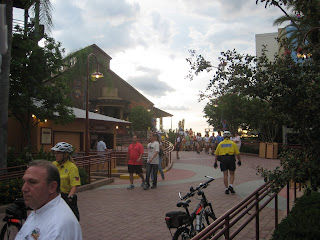 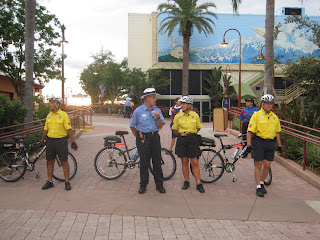 CLICK ON PHOTOS TO ENLARGE
I arrived on Pleasure Island tonight via the #1 Bridge but as I approached The Hub, I was told that the Island was closed and that I need to go around. I asked why and the CM told me that there was a training exercise in progress. As she said this employees and diners at Paradiso 37 were pouring out of the restaurant so I had to speculate that no one holds training exercises on a busy Friday night! 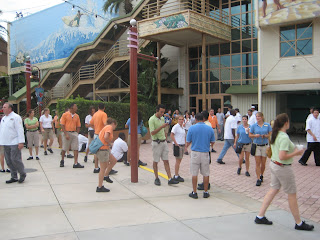 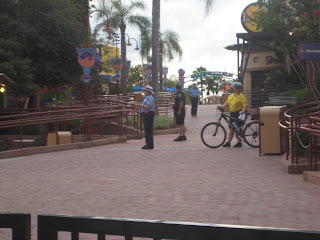 Paradiso employees congregated in the Funmeister Plaza adjacent RRBC and Motion as Disney Security secured the Island. A deputy from Orange County Sheriff's Office informed me that it was a suspicious package alert and that they evacuated in order to play it safe. Disney Security would not say anything additional. 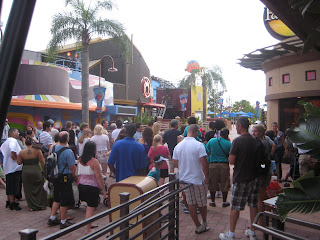 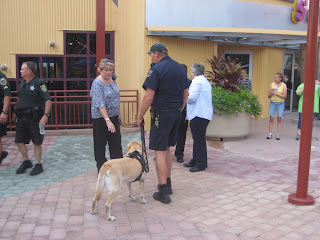 The Island was initially reopened as far as 8TRAX. This was the largest group I had seen outside 8TRAX since Final Night. The rest of the Island was then reopened.
Posted by Save Pleasure Island at 8:18 PM

its been evacuated for almost two years...

it is Just Disney trying to make news to get into the news! for same!

say it isn't true Disney LIED to you and said that they where training but the Cop told you something else? I think the cop is lying! Disney would never lye to us Opps I meant you!
so NOW what do you want to believe when Disney says PI is reopening? in any way! well do ya?????

On one of the other Disney fan sites people were making comments such as "I thought the Island closed two years ago!" & " They must have noticed somebody actually having fun at Pleasure Island and figured that something suspicious was afoot."

Anon at 12:03am, strictly speaking, the person did not lie. CM's are trained on the roles they are to take during an emergency. So they got some training last night. Disney has never said PI is reopening. PI has never closed.

I never said the CM's lied i said that disney lied to..... CM's are trained on the roles is the way to lie to us you and the world!!! and you are correct PI is not closed the clubs are! I have been lied to by Disney management!! I was told by one about something and then asked a second one and told me the total different thing with in 5 minutes!
so i know that Disney WILL lie!

To reduce the risk of a customer panic run, I think it's good business not to announce the true intent of such evacuations.

we should also get some decent information about destination 's current situation, so that we can avoid from this sort of panic. Here you can get a list of such awesome information about different attractive destinations & at the same time can also get awesome accommodation packages from Hank Freid to manage your travel according to your budget

this is also most crucial for a traveler to get some decent information about the place.I think this is not difficult in the age of technology