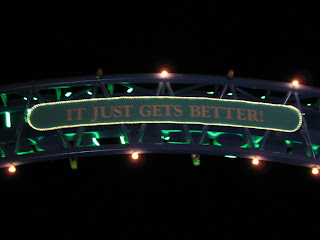 Everyone sees the Pleasure island sign as you come in over the bridges but this is what the sign says as you depart. Funny I never noticed it before. Kind of ironic, huh? 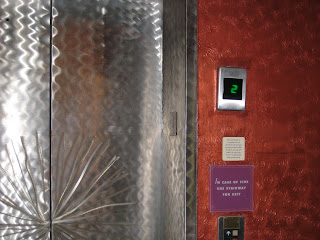 I'm happy to report that the Mannequins elevator has made it to the 2nd floor. It's been stuck on the 3rd floor since the club closed. Supposedly Mannequins will reopen when the elevator gets to the 1st floor. 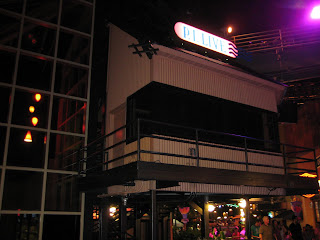 Rumor has it that this booth atop the Sosa Family Cigar bar is supposed to be removed to be replaced with an elevated outdoor patio smoking/drinking area. The booth was the former home of PI Live before it moved to the booth above Laffers Cantina. 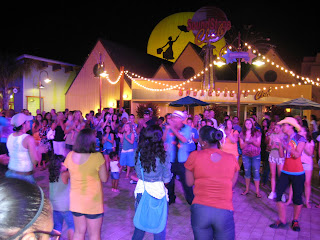 Celebrate Tonight continues to offer the only fun on the island.* What luck; you'll recall that a few weeks ago I caught DJ G-Clef doing the 5-cent, 10-cent, 15-cent, a dollar song & dance routine for the gathered crowd. Well damn, Sunday night he was doing the exact same thing during the 10:30pm edition! *-if you're 12 yrs old 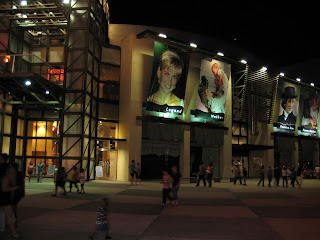 Over on the West Side, the Princess Diana gown display continues to wow the masses. Thankfully this is to close November 30th but it wouldn't surprise me if it remains in business through the holidays. American women fall for this kind of thing, you know. 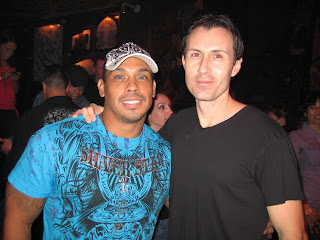 Some more familiar faces spotted Sunday night at Service Industry Night at House of Blues. Besides these two guys, I chatted with with at least 8 other Mannequins and 8TRAX regulars. It was great seeing PI fans! 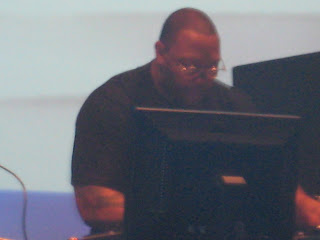 I was hoping to catch regular Sunday night DJ Sandy in action but it was a holiday weekend so that means DJ Magic Mike. My last time out (Memorial Day weekend) we got a good 45 minutes of techno out of him before he went hip hop on us. This time it was worse! There was no techno. He went hip hop on us from the start (although for the first hour he mixed some techno classics in there too). But he was mashing everything so most songs lasted about 15 seconds. After that it was 100% hip hop! 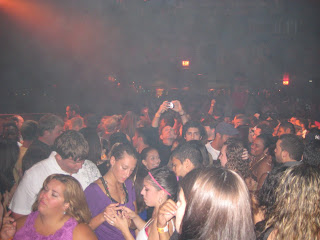 The crowd didn't seem to care though. It was really crowded; the most I've seen since Tiesto played here in September, 2007, This was a hip hop crowd and they got what they wanted. Mannequin fans were disappointed though.
Posted by Save Pleasure Island at 2:52 AM

It moved shortly after bob reported someone walked right into mannequins, so there has indeed been some sort of movement. Unfortunately, I got a peek a the back side of Mannequins by 8-trax where the smoking area was on the last night. There is a leak from the roof creating a puddle of water over by the 2nd floor bathrooms and the puddle is flowing right on over to the stairs and dripping down to 1st floor I'm sure. Such a shame!

Additionally, Motion now has that black material over its windows. They haven't seen the need to do that for a year, but now they do...so something is up. Either they are ripping it apart, or sprucing it up to reopen. Lets hope for the latter

oh come on Bob if it took almost a year to get o the 2nd floor it will take more than that to get to the 1st and if it does that does not mean reopen?

I've got a new series of rumors I'm working on which I might post later this week. The rumors conflict with each other so I'm seeing what more I can learn.

Actually Motion being blacked on the windows is neither a spruce or a a tear down. it was a private convention over the labor day weekend stop speculating..

If someone rented the club, why would they black out the windows? They didn't do that for prior renters. And if the rental is finished, why is the black masking materials still in place? Just wondering.

The event was a new pirate event that needed complete darkness for a full reveal of pirates hiding as the family entered Jack Sparrows hide away at World's End. The black covering were forgotten and have been taken down

Thanks for the info!

Interesting shit! Thanks for sharing.

It just gets better... like a BOLD NEW VISION of nothingness.