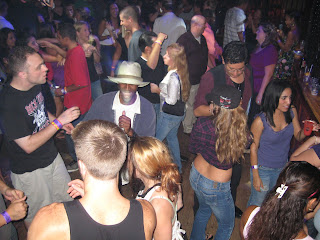 It's been a little while since I reported on Thursday night activities at CityWalk. Now that the tourist season has ended, how are the clubs doing on Thursdays? Pretty darn good! It was another 80's Night at The Groove featuring former 8TRAX DJ Doc Wells. It was a little light early on but by 11:30pm the club including the dance floor was pretty full, as you can see above. A nice feature of 80's Night is the wide span of ages of the patrons. Everyone knows and loves these songs and they're successfully drawing on Thursday nights. The $2 Blueberry Pop Tart shots are quite the draw too! 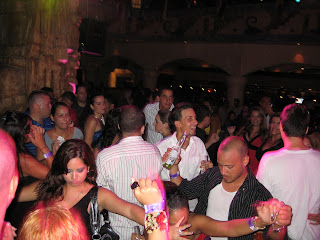 Latin Quarter also began the evening rather empty but over a 15-minute period around 11pm the place moved to crowded status, dancing to Latin rhythms and some House spun by DJ Leony. There is some serious eye candy in this place! Ladies get in free and drink free on Thursdays; Guys with hospitality industry identification can also get in free.

No photo from over at Red Coconut Club but the crowd was more moderate in size during both of my visits. The American tourist season may be over but the British tourist season is still in effect and there was a large number of Brits on hand.
Posted by Save Pleasure Island at 7:21 PM

I was there and had a blast (LOVE the videos)! Latin Quarter (1st visit) was also a good time. The Red Coconut Club was kinda ghetto blah...way too much hip hop. I also stopped in Pat O'Brians for a hurricaine (yum yum yum).

Between band sets and after the band finishes, Red Coconut plays pretty much the same music as The Groove plays on the weekends.

The Brits are definately in full force. As someone who works for tips, I cannot wait to see them go. I can't stand people who travel to another country and don't follow the local customs. And I know for a fact that they know what they're doing. That being said, I love Citywalk! Especially Cigarz. Such a friendly atmosphere if you can stand the smoke.

In Europe including the UK the gratuities (and taxes) are included in the price. It's a strange concept to leave something extra here and believe it can cause confusion, especially for those visiting for the first few times. Heck, I've been to Europe at least 20 times and still get confused about whether to leave anything extra beyond the gratuity that was included in the price.