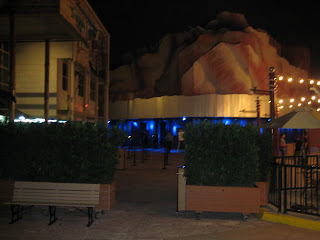 Well the first thing obvious about Motion being open last night was that Disney wanted to make sure it was very clear that Motion was not really open again but only that a private event was taking place "over there". There was an opening in the hedges to allow access but before you could get past the hedges you had to get past Disney Security who would only let pass those who appeared to know about the event. So that kept out any passersby and made it highly unlikely someone would just stumble upon the club and decide to attend. Those who knew about the event were allowed to pass through. 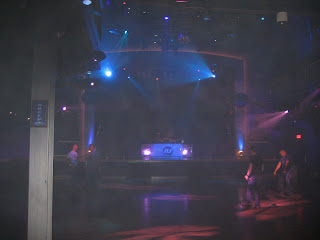 I arrived very early to get photos and there was only a few dozen patrons in the club before 10pm. But oh what a GREAT feeling to be in a Pleasure Island dance club again! And I was immediately reminded about what a great sound and lighting system Motion has. It puts The Groove to shame! And of course, Mannequins' systems were even better than Motion. 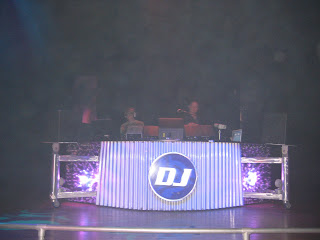 The early DJ was Orlando's own DJ Joanie. DJ Manny Lehman would come on much later. 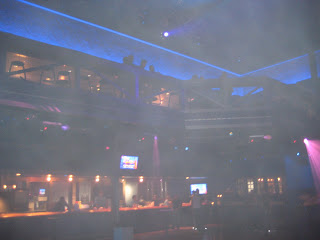 The Blog will be updated later once I have more details of how the evening went. Early reports are that DJ Manny played a lot of hard house (house music without vocals) which caused a large exodus of patrons around 12:30am. This is really unfortunate because what makes techno popular in the year 2009 is Dance music with vocals like (Kaskade, Tiesto, Ferry Corsten) and Top 40/Hip Hop remixes (Britney, Lady Gaga, Flo-Rida, Rihanna).

Update: Our roving reporter Thommy was at Motion on Saturday night and confirms the above. He says DJ Manny Lehman just didn't understand the Orlando techno crowd; only 3 songs with vocals were played: Poker Face, Sorry & Womanizer. That sent many leaving relatively early. He also thought the drink ticket system wasn't good because you couldn't put tips on a credit card and some people did not have cash with them to give cash tips. He reports many of the bartenders were very stingy with their liquor pours. He agrees the sound and lighting systems blow other Orlando clubs out of the water but that the lighting tech on duty did a poor job using what was available to him. Thanks Thommy! 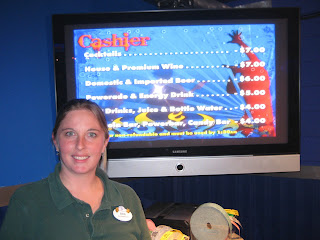 Erin from 8TRAX and Adventurers Club was selling drink tickets. The bars were staffed by Catering people who can't handle money or cash registers so Erin would take cash and credit cards and give out the drink tickets which could then be used for purchases at all the bars. Good to know how this works in case I ever am given the opportunity to rent the place.

Elsewhere, sources on the island mentioned that there may be an official announcement about Pleasure Island during July. Stay tuned!
Posted by Save Pleasure Island at 11:32 AM

Kb. I was there and everything you said was true. The music was decent but people definitely prefer the vocal tracks and the remixes. I talked with one of the sec guards. He said mannequins was gutted except the floor. Not sure if I believe it. I hope not.

The Papi giving out the glow necklaces said they wanted 500 but sold about 350 tix---which was about expected given the short notice. Such a sad sight to see Manny's marquee darkened.

Hmmm, I would think the first thing they would remove if gutting and not re-opening would be the floor. If the rumor is true (and I hope it is), a gutted dance club still with a dance floor is still and dance club!

I know some ppl on the island who insist you can't just remove that dance floor. It would essentially require destruction of the entire inside. If it was happening, we would know about it.