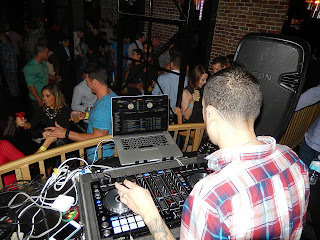 Great music!
Posted by Save Pleasure Island at 12:00 PM

I wonder how many peeps in the Groove knew who that guy was? Why bring a Tampa Dj in there that is probably not much different than the Orlando guys you would normally see in there? #doesnotcompute

CO2 added a couple months ago.

The only thing The Groove is missing now is a revolving dance floor....and more EDM!

Not sure about the Tampa DJ's. But I really liked Mondo & Tone when they did their gigs there. They've done their Miami guest DJ's too.

I think you're missing the point. ;) Orlando has Djs that can rock every bit as hard as those guys so why import Djs from another city? Just sayin..

Yes, Orlando does. I guess going out of town makes the event seem more special.

DJ Is Nick James from Hallucination Recordings (home to Rabbit In The Moon). I am one of the residents in Ybor at Filthy Richard (www.filthyparty.com) but I also work for Promo Only, Inc. in Orlando. They do book Orlando DJs, as well...just a rotation thing. As for the "not enough EDM"....agreed. The format is supposed to lean more that way now so you should be happier with what the the guys (and girls) are playing now. :)