Posted by Save Pleasure Island at 12:00 PM No comments: 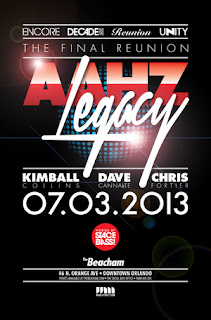 WHO:  DJ's Kimball Collins, Dave Cannalte & Chris Fortier
WHAT:  AAHZ Legacy, The Final Reunion
WHEN:  Wednesday, July 3rd - 9PM to 2:30AM
WHERE:  The Beacham (Downtown Orlando)
WHY:  Between 1989 & 1992, Orlando was at the center of the emerging House music scene and a club night called AAHZ at The Beacham Theater was the biggest rave of them all!  Since Mannequins closed, the annual AAHZ Reunion series of events recreated that scene and has taken thousands back to the good old days with original music and the original DJ's!  The event has always been packed and AAHZ Legacy will be the final reunion.  Don't miss this!
HOW:  Take a chance on a sell-out by purchasing tickets at the door.  VIP is already sold out.  Have peace of mind and purchase them in advance here.
HOW COME:  Read yesterday's Orlando Sentinel article from columnist Jim Abbott about the event here.

Posted by Save Pleasure Island at 1:00 PM 10 comments: 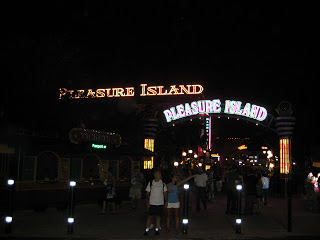 Five years ago today, Friday, June 27, 2008 was a day that will live in infamy.  You all remember it well.  Disney dropped a bombshell early that evening which appeared in the Orlando Sentinel the next morning:  All the comedy and dance clubs on Pleasure Island were going to be closed in exactly 3 months....September 27, 2008!!

Shock, dismay and disbelief was expressed everywhere but no one truly believed that Disney would really do it.  Surely they would come to their senses!  But they didn't come to their senses and on that fateful Saturday night in September, the clubs really did close.

And here we are 5 years later with two clubs demolished and supposedly more demolitions coming.  Plan C (Disney Springs) has been announced but like the two plans before it, zero construction has ever started on the Island.  The buildings have remained dormant ever since the closure.

The link to that Sentinel article no longer works but they also published this article a couple days later which pretty much summarizes everything.

Five years of nothing......for no reason.
Posted by Save Pleasure Island at 7:00 AM 2 comments:

THURSDAY JUN 27
He's always in a good mood and always puts on a great show!  His hits always got a lot of play at Mannequins too.  DJ Ferry Corsten (NL) this Thursday night at Roxy.
($20)

FRIDAY JUN 28
Bringing the sound of Miami House music to Orlando and opening with O-Town's own DJ Evo (Firestone, Bikkuri Lounge)!  Suite B Lounge.
(FREE until 11pm then $5)

SATURDAY JUN 29
Barely over a 1-hr journey from Orlando, take the drive over to Amphitheatre in Ybor City this Saturday night for the legendary DJ Icey (USA)!  The revolving dance floor will bring back memories of someplace much closer to home!
($10)

But if you can't leave town, consider this month's edition of "Lost In Trancelation" at Bikkuri Lounge, featuring the rapidly rising DJ Robb Blak and others.
(FREE)

Right downtown at new club Thee Grotto behind Bank of America Plaza, NLP DJ's Matrix, J-Dub & David Selgado open for FACTORe (USA). They have their full liquor license too now!
($5 until 11pm, then $10)
Posted by Save Pleasure Island at 7:00 AM No comments: