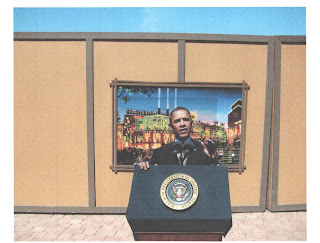 President Barrack Obama's visit to Orlando and Walt Disney World yesterday included an unexpected stop at Pleasure Island where he gave a short impromptu speech.  Speaking to the surprised crowd and members of the Press, he announced that he wanted to see Pleasure Island dance and comedy clubs reopened. He was pleading to top Disney management when he exclaimed, "Chairman Iger, tear down this wall!"  He said he wants to see Motion rebuilt, would like to hang out with the Colonel sometime and hopes to take a spin on the revolving dance floor at Mannequins before his second term ends. He quickly left the Island for Orlando International Airport where Air Force One was waiting.  No word yet from the  Romney campaign on where Mitt stands on this important I-4 Corridor issue.
Posted by Save Pleasure Island at 4:46 PM

LOL... Thanks Bob for the laugh!

LOL - good one Bob - and it wasn't even April Fools day

hahahaha, i am sure romney feels the same way!!! its un american for Disney to not have PI.

Well the way politics have gone the last decade, I think if the Democrats are FOR Pleasure Island then the Republicans are going to be AGAINST it. Just because.

If that Socialist is for it, then I'm against it. Disney should do the right thing and fumigate the Contemporary Hotel now or else the essence of stupidity may never fade from there.

If that morman guy gets in then there will no drinking or dancing anywhere!