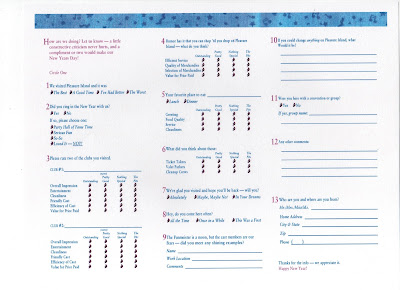 Do you remember back in June, 2008 when Disney announced that they would be closing all the comedy and dance clubs on Pleasure Island in three months? And the stated reason was because surveys showed that guests were wanting more dining and shopping options rather than clubs.  Speculation at the time was that there really were no Pleasure Island surveys, or if there were surveys, the only people being surveyed were moms pushing strollers across the Island during the day rather than any guest in any club at night.

Well here's your chance to take a real Pleasure Island Survey. Yes, this form may date back to the early 90's but surely Disney's desire to know how their guests feel never expires.
* Print the form at: http://www.mediafire.com/?9vb2vy0zsk6w9kz
* Print extras for your PI friends.
* Complete survey, fold it twice to create a letter-sized mailing, then address it-stamp it-send it.
* The Blog recommends constructive criticism. We also recommend that you use your real name and address so they know you are real and can respond to you if they want to.
* Send to:
-  Keith Bradford  VP Downtown Disney  Walt Disney World Company  P.O. Box 10,000  Lake Buena Vista FL 32830
Thanks to the Save the Adventurers Club Facebook group for sharing this!
Posted by Save Pleasure Island at 11:51 AM

I used to fill these out! LOL!

Duane and I did also.
Shelley Lyn

Come on readers....everyone needs to send one!