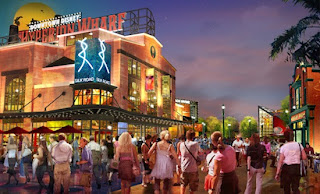 Last fall when Disney released five pieces of concept art for Hyperion Wharf, they were careful not to display any of the names of companies that have supposedly signed on. Curiously though, that was not the case with the concept art featuring the view from the No. 2 Bridge towards Mannequins. As you can see above, it quite clearly showed a redesigned building featuring the name Silk Road. Silk Road is (was) a real restaurant located in the new Vdara Hotel, CityCenter, Las Vegas. Many internet posters speculated that Disney pitched restaurant concepts to many companies and Silk Road was one of them and that's why the name and actual logo of that restaurant was there.  I say no. Unless they were actually coming to HW, Disney could not have released something with their name and logo on it without permission of that company.  So one has to speculate that Silk Road has (or had) actually signed-on to Hyperion Wharf.

My April 1st blog entry regarding IHOP coming was of course just a joke.  But get this! Save Pleasure Island Blog sources are telling us that indeed a restaurant is coming to Mannequins and not only will it occupy that club but also the space being vacated by Orlando Harley Davidson and also part of the 8TRAX space! I now have doubts though that it's Silk Road that's coming because....the Silk Road in Vegas has apparently recently gone out of business! So stay tuned as we keep our eyes and mouse ears open.
Posted by Save Pleasure Island at 11:01 AM

That would be the end for me...I could never venture to the Pleasure Island area again...ever. Seeing that building as anything but a club would make me ill.

I heard they were considering a Barnes and Nobles with a Starbucks due to the size of the building. Is there any truth to this?

I thought you already wrote it was going to be an IHOP...
;-)

BNN would be perfect for Virgin

Very dissapointed. I was still hoping for a dance club. Not happy here....

If the rumor is true, there could always be a nightclub component to it; nearly every CityWalk nightclub is also a restaurant to one extent or another.

8TRAX would not get knocked down. It is the same building as Mannequins and Harley. But serious renovations would be needed to the entire complex.

Silk Road is still a possible name to consider however if the $22 breakfast buffet did not fly in high-spending Vegas, it sure ain't gonna fly in bargain basement Orlando. In fact, they really ought to consider the revolving IHOP!

Have heard no rumors of a Barnes & Noble or Starbucks. We sure don't need either at DTD.

That's a pretty big restaurant... I don't think it's likely.

Hopefully Mannequines will be made into like a dinner and dance type of thing.
If I remember correctly City Walk has that sort of thing at the
"Red coconut",as for 8Trax come on guys it doesn't take a genius to sweep the dance floors and put tables,and finally a D.J. to party and dance.
Hopefully King Bobb they'll think about this.

That would be one HUGE restaurant. Comparable to Hard Rock or Buffets @ CW. Realistically, how many companies would be willing to take on that much of a risk? I assume it has to be a recognizable franchise.

RCC at City Walk is just appetizers, where as Latin Quarter and Pat O'Briens are full on restaurants that take on the night club effects at night. Now, if Silk Road has backed out and there is still talk about House Of Blues backing out...Virgin Megastore has closed, all night clubs have closed, and I heard Paradiso is not doing so well....What the hell else is there to do at DTD?? What the hell are you Disney people thinking?? I was such a HUGE Disney fan and every day that goes by, I get that much more pissed off. All we can do is hope that there will be some "night life" at Hyperian Wharf, but I SERIOUSLY DOUBT IT!! I am SO glad for City Walk!! Thank you Universal for giving us something that Disney completely F'd - up!!

I agree with Damnmouse72. We always stayed at a DTD hotel for the night entertainment. Even since PI closed we are dedicated Citywalk patrons.

I always stayed at a DTD otel for long weekends of Disney/PI fun but I have not been back. I wonder if the DTD hotels took a it from PI closing or are hotels such a need it just never registered.

Before even the PI Final Night, the Blog reported on Downtown Disney Area Hotels saying they had lost convention and meeting business because of the lack of nightlife.

The Blog reported a couple months ago that banquet revenue at WDW was down -25% from pre-closure levels. Certainly some of that is the economy but that huge of a drop represents the lack of nightlife too.

lack of night life AT "PI" and banquets down! GOOD I hope this bites Disney in the *ss!! big time!

Yep. I was a regular at the Disney and DTD hotels when PI was open. Close the night down at Mannequins, pour yourself into a bus, and you were good to go.

I've since started staying up near Citywalk. I should send a copy of the bills to Meg Crofton, et. al...

Send them to Al Weiss. Sources say that allegedly HE was the guy behind the shutting down of PI although I'm confident many were in on the decision!