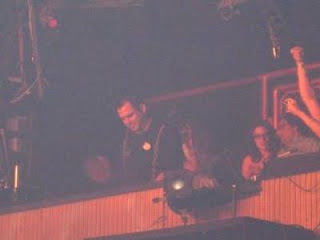 When DJ Peapod walked out of the booth at Mannequins on that fateful Final Night in September 2008, no one could have expected that we'd not see him again behind the decks for over 2 years! Within a month of the club's closure, he had come close to a deal with AJ's group at CityWalk to have a Wednesday night gig at The Groove.  But that fell through when they allegedly would only promise him a 3-week tryout yet still require him to purchase $1M in liability insurance. In addition, his Wednesday night gig would require him to add Hip Hop to his playlist. Peapod told them that he wasn't a "Motion DJ" and walked away from it. Instead, he went into self-imposed DJ exile, packed away the music and did other things. Gotta love his conviction!

For those of you not on his mailing list, we're thrilled to announce that he has released a new album curiously entitled Revived. You can listen to it and download it for free at djpeapod.com.  I think it's awesome; the first half is typical Peapod with a number of 2010 dance hits on it that would have been played in a 2010 Mannequins but then it gets progressive with some music that could have fit into Mannequins in the old days. He promises a more mainstream album in a month or so.

Are we seeing the return of DJ Peapod? Let's hope so. His music and equipment are obviously unpacked and he's racing to catch up with today's dance music scene! This is a great development for PI fans and let's hope to see him behind the decks of an Orlando club asap!
Posted by Save Pleasure Island at 7:08 PM

I have a lot of good memories about him up in the dj booth playing good music. Still can't believe they closed it.

Thanks Bob!
This track is great!

I had a lot of good times and a lot of and times! when he first started I thought OMG not another Bad DJ but he got better! but the last couple of years it went down hill. IN my opinion!!!! I know that a Bunch will agree with me! and some will not! but that"s OK

Luv the new album! Brilliant. Many visits to Orlando and look up and see him in the booth.

PP's one of the few DJ's with 30 years mixing experience spanning across several generations that allows world-class scope & vision in the music industry. Always liked his music and style, more power to him.

I agree, PeaPod was absolutely the best when he was allowed to choose his own material. But when any club management begins imposing formats and playlists on DJ's ..as it seems they all do eventually.. nothing good ever comes of it. Censoring an artist is like castrating a Gigilo.

I've never carried insurance and I spent all of 2010 working at either the Groove or Red Coconut so something changed since 2008.

I can definitely see the hip hop thing being a deal killer; I hate playing that crap but you can't get away from it. It took over in the mid 90s and still hasn't let go.

DJ Smooth, I believe the way it works now is that AJ's company carries the liability coverage for itself and its employees; the employees being the various DJ's. I'm not certain though. Readers that live near the mountains in Clermont can enjoy Top 40 from DJ Smooth this Friday night (21JAN) at Vue Night Club, located next to the Harley dealer on US27.

Anon at 1:39am, Mannequins definitely changed over the years...because it had to. Early-on it was a very progressive techno club because that kind of music was very big back in those days. But we all know how that died out; see my recent article on the evolution of dance music. Hip Hop remixes became a good third of what made up dance music during Mannequins later years so that's what got played. Peapod and the others were playing to their audience. Whether Peapod had complete authority to play what he wanted, I don't know.