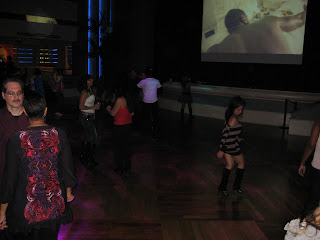 Posted by Save Pleasure Island at 1:16 AM

When do we stop calling people former 8trax and mdp patrons? Might as well start calling them adh patrons now. :)

I suppose that as long as I keep spotting former PI patrons at other clubs, I'll make that reference about them. After all, this is a website "about" PI.

In a few years when they close ADH and I create the "Save Atlantic Dance" blog, I'll refer to people spotted elsewhere as "former ADH" patrons.

The "half full" report for ADH doesn't bode well for enticeing Disney to reopen nightlife at Hyper Barf.

ADH and Hyperion Wharf are really two different animals. Disney runs ADH but they do it on behalf of the Swan and Dolphin hotels. Disney does not advertise ADH. It's up to the hotels to promote it and they appear to only do that for guests. The success (or lack of) of ADH is not an indicator of what could be successful at Hyperion Wharf.