The dog days of August have finally arrived in Orlando. It is soooo hot and muggy out there. But if you're going to sweat like a dog, what better place to do it than beautiful Pleasure Island. Here's what's happening out there. (Also see yesterday's post.) 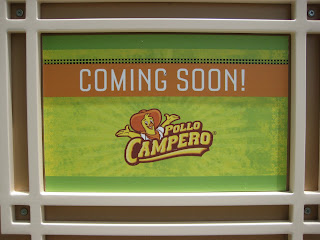 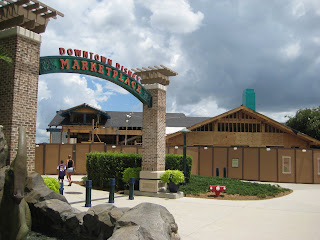 CLICK ON PHOTOS TO ENLARGE
Over on the Marketplace side the former McDonald's building is in full-scale renovation mode with replacement Pollo Campero signs now displayed on the construction walls. 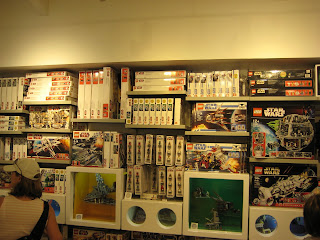 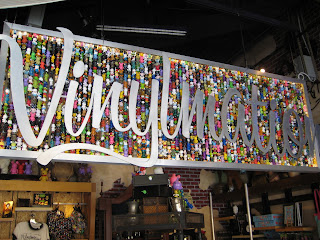 With the huge Star Wars convention at the Orange County Convention Center taking place next week, the Lego Imagination Center is fully loaded with Star Wars Lego products. Even the D-Street/Vinylmation Store on the West Side was carrying Star Wars products. 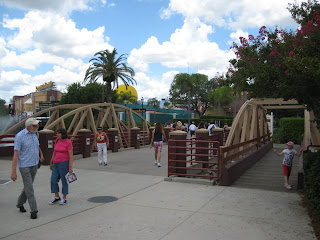 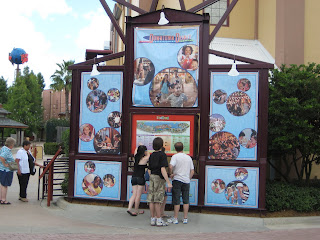 Whatever construction is coming to the PI #1 Bridge has yet to begin. Large groups of tourists stop at the PI sign to contemplate their many Island options. 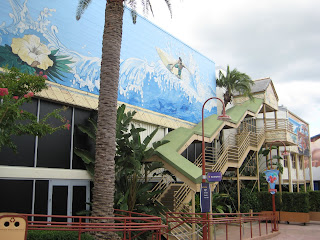 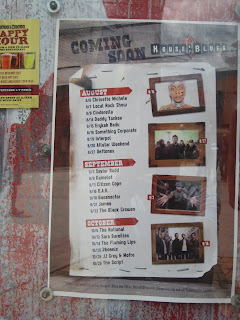 A daytime view of Rock'n'roll Beach Club. My nighttime shots last week were difficult to see. Meanwhile, over at House Of Blues the concert list is up but nothing impresses me. Flaming Lips are about the only band I recognize. Sources say DJ Deadmau5 (CDN) will never return to HOB or even to Orlando because someone threw a bottle at him during his concert there last November. I saw people throwing paper balls at him but I didn't see the bottle. No one deserves that! That's all from PI and DTD for now. Stay tuned for all the latest news and rumors here on the Blog!
Posted by Save Pleasure Island at 2:53 PM

Dear KingBob thanks for the photos of Pleasure Island,DTD, and other surrounding areas of orlando. Everytime I see them it brings back many good memories . It makes me want to go party at Pleasure Island again. Me and my family where there the last week Pleasure Island was open what a great time we had there. Disney really was in a class by itself. People can say what they want about Mr.Eisner but he helped Disney expand with his vision of what could be. Eisner knew what Disney and the public wanted and expected. Hopefully Disney will learn from the past and look to the future as Walt Disney did in his vision .

As always I hope that Mr Staggs will reopen the clubs at PI.
Hope somebody wakes up and smells the coffee burning.
Let Pleasure Island Rock again!!

has anyone else noticed marie antoinette and her possee in front of the fulton crab house?

If you're talking about that group that looks like they're from George Washington's era, yes, I've seen them! I hope they stay outside Portobello and don't graduate to PI!

Just got my reply email today. Probably old news for the blog.

We received the message you sent to Tom Staggs and he has asked me to reach out to you on his behalf. We appreciate your passion for PI and enthusiasm for our product offerings. Although we understand your disappointment with the closing of the clubs, please understand that a tremendous amount of thought went into our decision for the creation of a new vision for DtwnDisney. As we look forward, we are excited about the evolution that will occur over the next two years, introducing a brand new mix of shopping, dining, and other opportunities for our Guests' enjoyment.

do you of any pictures and or websites of the downtown disney pleasure island under construction?
if so can you share?

Readers, I got to meet TightGlove at the Pleasure Island Reunion months ago at Atlantic Dance. He doesn't hide behind the Anonymous tag. If he posts that, then I believe him. Can any CM's tell me if Heather Harvey is in California or here in FL? TG, this is NOT old news.

>Do you of any pictures and or websites of the downtown disney pleasure island under construction?
if so can you share?

The best I can do is refer you to my 6/17/10 article called PLEASURE ISLAND BEFORE PLEASURE ISLAND. Regis shows some of PI during construction. Also, my 3/8/10 entry shows an early PI circa 1991.

KingBob
you got to meet tightglove!
OK! NICE!
so no one else is to be believed?
just because they don't want there name out there?
he doesn't tell us who his source is so why should we believe? them?
OH I know they might get fired!? so just maybe someone on here is the same?
is that NOT what the Anonymous might be for?
JUST sayin!
well I have read things on here that I sometimes could believe?
and have read things on here that I have heard different from a Cast member!
MY point is like you said rumors

Tightglove said nothing about a source so I don't know what you're talking about. He got a response to his email to Staggs and posted it.

No one said that anyone must post their real name to put comments on here. I kind of doubt Tightglove is his real name or that he can be identified.

Despite what has been written about nothing being demolished, sources continue to tell ME that RRBC is coming down in October. I hope to have a new article posted before 11pm tonight.

That article will have to wait for Thursday. I'm running with a PI update tonight.

Anon 6:58
hey some on here think that some of the things that have been said can't be true because someone doesn't have a source?
and when I read that someone said they heard one thing about.....(and not getting into what it was) and said it came from a CM and that this person was a Union rep. they said "big deal" SO this is what an why I said this!
and I didn't say that they we have to post our name(s)
I was JUST SAYIN!
I will say it yet again
just sayin!
I don't under stand your statement (anger?)
"because that is what is happening, nothing, a light pole being removed does not constitute anything happening out there."
your right we don't care about light poles I (we) all read this to see what Disney MIGHT be up to? and also what is going on around Orlando, fl
I felt that we should have to believe someone and only them because they know someone at Disney!?
I have heard things that have say the total opposite of what Bob and others have posted on here and because of this most don't want to believe what I have posted! and have heard from a long time CM. and talk to uppers. and tell me that this can not be true. so I am posting my opinion.
and over the years have heard that PI was going to do things that just do not come true! uppers didn't want it to happen so it didn't. like i said and KingBob has said rumors rumors rumors will will not know what is going on till......

tired of rumors, too many hopefull people on here that want to believe that tomorrow night pi will open EXACTLY THE WAY IT WAS... ITS JUST NOT GOING TO HAPPEN. i read this blog for the great info on orlando clubs, but have become VERY entertained by the rumors , its just crazy how moving planters of flowers or removal of light poles means SOMETHING MAJOR is going to happen, its just not coming back even if we bang our fists on the brick pavers in the middle of the street

be careful what you say Anon 7:48
you might join the club of people who (for some) don't welcome you on here for that statement!
some just don't want the truth! or can't handle it!
some say they have the inside info but it hasn't come true (RRBC was to come down by now and others)
Michael Eisner is the one who dreamed up PI and he was the one who convinced the Disney board of directors to open it even if they didn't really want it! Kevin Lansberry is the one who convinced the Disney board of directors to close it they are the ones who never wanted PI! and so it will never be again! SORRY!
I loved PI as much as the next but...

Everyone is welcome to post rumors they've heard and post their opinion about PI then and PI now. I think a good number of the rumors that have been posted (Schussler Creative restaurants, etc) were valid when they were posted but circumstances changed. All I can do is keep my eyes and ears open and keep you readers updated. PI as we knew it will never happen. But some entertainment options for us adults remains plausible.

will never happen adult entertainment... we all nrrd to give up its been over for almost two years