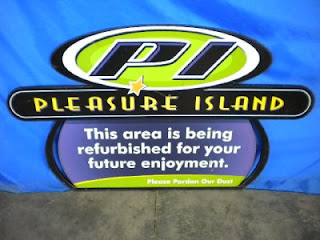 A couple days ago I received information about a lake water fountain show that might possibly get built in Village Lake behind Pleasure Island. Before publishing it I wanted to get some verification on the rumor from at least a second source but before I could do that the website Screamscape published the same information, likely from the same source. So since there is already chatter about it out there, I might as well report to you what I was told.

This would supposedly get built in the lake and be visible to restaurant customers on the new PI as well as from the waterfront walkway on the West Side. The fountain show each evening would be synced to music and involve dancing waters, fire and water screens. This has not been finalized and there are logistical issues since the lake is a live lake and they would have to create a system to filter-out tiny organisms as well as not fry any of the fish out there!

From what I've been told, the water taxi system from resorts north of Village Lake would continue to operate to the Marketplace but the internal water taxi system to PI and House of Blues/Cirque would be discontinued. They are considering options to replace that, one of them being a trolley system that goes back and forth. Concept drawings show yellow street cars.

So that's the rumor. Presumably this would be a free show each night, meant to draw patrons to DTD evenings who would then eat and shop while there. This would not be an east coast version of Disney's World of Color, a show currently under construction at Disney's California Adventure theme park.
Posted by Save Pleasure Island at 2:06 PM