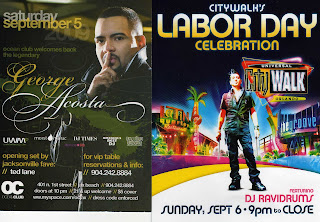 SATURDAY: In Orlando, don't forget awesome House music with DJ Mickey Bono at Bliss Ultra Lounge. Around the corner former Mannequins DJ Dominick will be spinning Dance and Top 40 at Vintage. In Tampa DJ Santana and DJ Chris Craze will be playing Top 40 early and Dance music late (to 6am!) at Floyd's at the Seminole Hard Rock Casino. In Jacksonville Beach the Ocean Club is about the only club that brings in House DJ's and this time its DJ George Acosta. We haven't seen him around in awhile and he has a new track that has hit the Dance charts!

SUNDAY: Not known for Sunday night entertainment, CityWalk takes a stab at it by offering up DJ Ravidrums. Check him out on YouTube but he's a DJ that plays a variety of drums while he mixes techno music! CityWalk clubs will be open too! DJ Nova from Antigua will be spinning mostly mashups at The Groove while DJ Leony will playing Latin (and hopefully some House) at the Latin Quarter. It's Service Industry Night at the House of Blues and it will be packed to the rafters for DJ Sandy! DJ X will be the main DJ spinning at a fundraiser at Suite B Lounge in downtown Orlando. Cover charge is just $7 in their "Dance For Ta-Ta's" night. Back at Floyd's in Tampa DJ KJ of K5 will be featured in "an old skool reunion" called Memory 09. Doesn't sound like techno though.

Have a great weekend!
Posted by Save Pleasure Island at 8:52 PM