DJ Leony: House In His Home 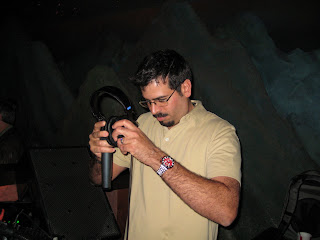 Early this morning around 12:45am Leony began a set that must have lasted at least a half hour. The A/C system was doing a poor job and it was really muggy. The dance floor was absolutely packed but I didn't see anyone leave it. The set was punctuated by DJ David Guetta's When Love Takes Over (feat. former Destiny's Child Kelly Rowland). WOW. Leony mentioned that he played even more house music on Friday night which I missed. Unfortunately the House Set ended way too soon and it was back to the core Latin music.

You can hear an awseome DJ Leony progressive house/techno set every Friday night at midnight ET on BPM on Sirius/XM Satellite Radio. At Latin Quarter, he's in the mix every Thursday, Friday and Saturday nights. On Tuesday you'll find him at Tabu downtown. I hope to report on that later this month.

Posted by Save Pleasure Island at 1:41 PM

I heard DJ Leony on siruis and well I think Orlando should be ashamed to have him to represent us here in Orlando! siruis took DJ Icey off for him YUCK! big time

For Your Info....DJ Icey’Automatic Static
Sat 1 am ET
Replays Sun 2 pm, Mon 6 pm and Weds 8 pm ET
Icey's show is dedicated to the sound of breaks with a tad of funky fidget and electro thrown in. You'll hear loads of exclusive, unreleased remixes and edits on the show. Icey is a touring maniac, always on the road, doing over 100 DJ shows a year for the last decade. Tapped by the UK's Pete Tong, to record the first installment of the highly acclaimed "Essential Mix" for the US, Icey has sold over half a million copies of his various mix CDs. In addition, he runs his Zone Records indie label.