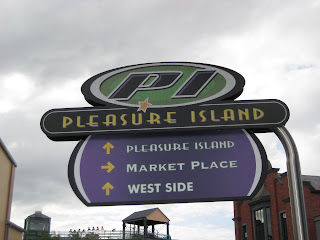 It was a beautiful spring Saturday evening in Orlando so where else to go but visit our favorite clubbing place.....Pleasure Island. It's been awhile since I've been out here so let's take a look at changes. 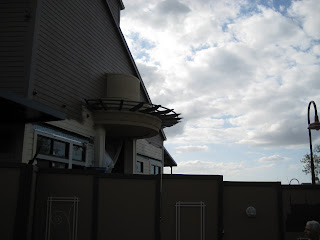 Pictured above is Paradiso 37, the new Central/South American restaurant and night club that is being built across from the club formerly known as 8TRAX. This will also feature a tequila bar and Streetfoods of the Americas, some sort of fast food/tapas kind of place. The May opening date is now either very late May or early June. This restaurant/club is outsourced....it will be operated by e-Brands. Among the previously received rumors, e-Brands was mentioned as the operator of reopened 8TRAX and Mannequins. 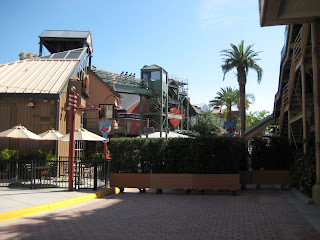 The pathway in front of RRBC to Motion has been blocked by these beautiful planters. This apparently keeps patrons from wandering into more nothingness. The restrooms can still be accessed by walking on the other side of Sosa Cigars. 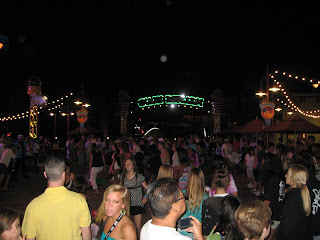 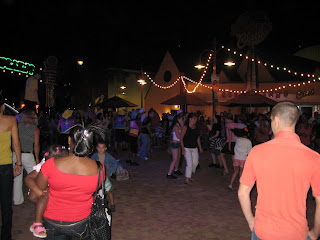 Over at Celebration Plaza, the Saturday night version of Celebrate Tonight was looking pretty successful. Quite a few people were either participating doing the Cotton-Eyed Joe dance or were watching. The 20-minute celebration cycle (3X per hour) has been scaled back to a 2X per hour cycle which should put a lot less stress on the DJ's and helpers. It also appears that PI Live begins later than it had been. One thing that would make this even better though would be an PA announcement at least every half hour that stated "Ladies & Gentlemen, please ignore all the empty buildings around you!"

Rumor has it that Disney just applied for liquor license renewals for Motion, Soundstage and Adventurers Club. That makes sense; the clubs are available by Disney for private rentals. Just not to me. I asked Barry Jacobson, the Director of Event Management at Walt Disney World why I was being turned down to rent Soundstage for a Mannequins Reunion event. His responses, and I quote: "We reserve the right to say no to any event" and "I don't have to give you a reason." I'm sure Disney stockholders don't care if this is yet another $50-75K in revenue turned away during tough times. Oh well, our Reunion will take place off site. Without copyright infringements.

Pictured below, this tourist was spotted wearing an awesome official Disney t-shirt with a message that all of us agree on! These shirts can be purchased at the Hanes Design A T-Shirt store in Downtown Disney Marketplace......or design your own. 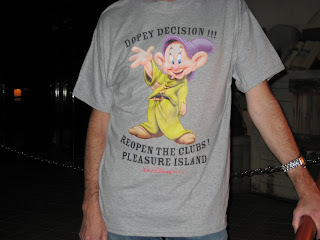 Posted by Save Pleasure Island at 10:27 AM

did they make at the hanes place?

Yes, I just updated the blog entry to reflect that.

omg that shirt is awesome! I'm gonna have to stop and get one today

Thanks so much for the updates. Do you have any idea if there a lot of people who want the clubs back or just the die-hard who are making a lot of noise.

First, disney demolishes the Golden Girls house on the backstage tour and now they close down PI. Two horrible decisions.

It's some of both. There are far more die-hard Adventurers Club fans than anything else but there are plenty of us wanting some of the dance clubs back too.

All you have to do is stand on the island and listen and you hear all kinds of people wondering why they closed the clubs. People still show up in their "going out" clothes wanting to party, only to find out it's atlantic dance or nothing

Yes, I've overheard the bartenders at Laffers Cantina get asked that a few times.

I'm a Concierge host at one of the convention resorts, and I am often asked about the night life options from my convention guests, and the answers now are just lacking. Based on my experience working in guest service, there is a demand. Disney just needs to work on answering that demand. But now I hear that One Mighty Weekend won't be taking place on property either.

I hope to post an article in the near future about Orlando Vibe, Gay Days, One Mighty Weekend and the Mannequins Reunion. By choice, Disney does not play a significant role in any of these.

king bob,hey Try seeing if we can rent one of the groove night clubs for a dance party, with strickly techno dance music. alot of people rent the venues for partys. we should too if they see how busy and popular they are then they will make a night like 80's night and we can have 1 day a week thing. its worth a shot!!

I cannot wait for Congaloosh in 148 days. That's the night we prove to Disney the importance of the Adventurers Club, fans, and Pleasure Island. Thanks for the report.

"I don't have to give you a reason" ... how incredibly pathetic of a response is THAT? From the company that's supposed to lead the world in customer service?

Yes, my conversation was very unlike what I expected from Disney. Especially from a Disney executive.

which simply proves my point...if someone on the front lines isn't making guests come back, then no one will, because the executives around here sure aren't helping things.

When an explanation is given, one may not like the answer but at least they know where the other side is coming from. Disney's failure to explain their decision shows complete arrogance. Heck, their whole failure to explain anything about PI to the public has shown how they've lost touch with their customer base, IMO.

I simply hate the fact that PI is gone the way we loved it. Thing is, though, it all comes down to money. And Disney does the best at separating parents from their money, on behalf of the parent's children. That is their bread and butter, not us who love to drink, dance, party and hit on chicks who don't think they're gonna get hit on in Disneyworld, even though they are dressed like strippers and just ordered their fifth shot of the night on behalf of the bachelorette party they are attending :)

It just comes down to money. And "None" is right, most of the front line troops are off trying to keep the families from defecting to Universal.

Universal will never be what Disney World is because WDW is so huge. None the less, Universal is doing a lot of things right. CityWalk has captured a lot of adults who used to give Disney their money. They are investing in new rides; i.e. the Rip, Ride, Rocket roller coaster and the Harry Potter Land. The only thing Disney has built and continues to build are new timeshares!

2nd quarter profits at Disney were way down this year due to the economy. Had PI remained open, profits may have been just $1M higher. Not a lot in the big scheme of things yet it's still ONE MILLION DOLLARS more!