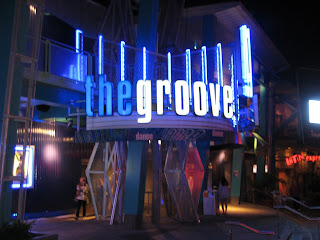 This past week or so has been devoted to Pleasure Island rumors so I thought it would be appropriate to mention that other place again: CityWalk

The new Food Court is open featuring the world's first Burger King Whopper Bar, a Moe's Southwest Grill and a Panda Express. Officially open until 2am, the place was mobbed last night at 1:45am as the clubs let out.

Speaking of the clubs, they continue to be packed on Saturday nights as Universal's Mardi Gras celebrations spill over into CityWalk. There were long lines at all clubs. DJ AJ stuck with the mostly hip hop/Top 40 format with just a few techno songs though. Unfortunately I walked into Latin Quarter too late to hear most of DJ Leony's House set; he was on a tear with progressive songs you're more likely to hear on his Sirius/XM show than in the club! The dance floor stayed packed.

Some of the largest CityWalk crowds of the year could happen this coming Saturday night as the featured music artist over at Universal for Mardi Gras is Kelly Clarkson.

I got to check out this past Thursday night's "80's NIGHT" at The Groove. It really got crowded in there; lots of spring breaker's were attending. 80's Night features former 8TRAX DJ Doc and a night here feels exactly like you're in 8TRAX. Fans of 8TRAX should definitely give this a try.

I can't believe that they're not going to renew our passes. Seems pretty short sighted.