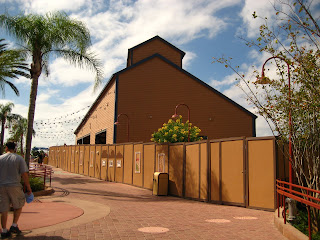 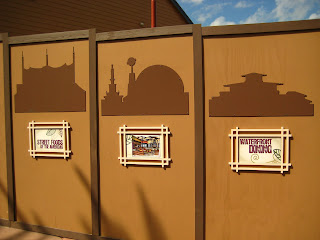 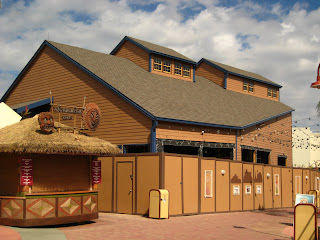 The ONLY thing that has been announced so far for Pleasure Island is a South & Central American restaurant that turns into a night club in the later evenings. The concept is similar to The Samba Room on Sand Lake Road and Latin Quarter over at CityWalk. This is definitely going into the building that previously was the home of the Missing Link Sausage Company, a fast-food restaurant. The building was closed and extensively renovated a couple years ago but never reopened. Apparently the renovations were insufficient to meet the needs of this new venue because it is being renovated again; actually gutted.

If you click on the photo with the signs you'll see what they're willing to tell about the place: Waterfront Dining & Street Foods of the Americas. Very interesting. We know there are large windows facing Village Lake. Will there also be outdoor seating along the water? And Street Foods of the Americas? Reminds me of food carts or food stations each serving local specialties al la EPCOT Food & Wine Festival. We''ll be watching closely because this is the ONLY new venue announced so far for PI.
Posted by Save Pleasure Island at 4:58 PM