Over 400 people have already signed the SAVE PLEASURE ISLAND petition. Please sign the petition a.s.a.p. and tell your friends about it. It would be great to get this signed by over 500 people by the time the originator of the petition will print it and present it to Disney officials.

Posted by Save Pleasure Island at 7:51 PM No comments:

What Can I Do To Try To Save Pleasure Island?

It's not too late to for YOU to try to help save Pleasure Island! Sources say that Disney management has already been surprised by the outpouring of sentiment about the closing. Please take a few moments to send letters and/or e-mails to top Disney officials. TELL THEM TO SAVE MANNEQUINS & 8TRAX as well as any other PI attractions that interest you.

Real letters are more effective than e-mails but e-mails are better than doing nothing, so please join the Fight to Save PI!

Posted by Save Pleasure Island at 7:37 PM No comments:

One View on Why PI Is Closing

The website Mouse Extra has covered the story of the closing of Pleasure Island. In the comments section of the June 26th article a reader named Jessica Rabbit posted a story about Disney doing many things that led to PI's demise. This is opinion however many of the things she states do match up with actual occurrences and thus I present it for you to consider. Click on this link and then scroll down to the Jessica Rabbit letter:

http://www.mouseextra.com/2008/06/28/its-official-pleasure-island-is-a-goner/#comments
Posted by Save Pleasure Island at 7:16 PM No comments:

Beginning of the End

Marketplace by its very nature has a large selection of stores and restaurants, with many of the shops filled with Disney character merchandise. The West Side has never had much to entice the majority of Disney visitors with their children. Shoppers at Marketplace had a long trek to go to the West Side. They had to follow the long sidewalk adjacent the Downtown Disney parking lots and then either go in front of or behind the Planet Hollywood icon restaurant. But either path required a deviation around Pleasure Island. Not that many made the long trek but in my opinion this was more to do with the shop selection at West Side rather than distance.

Disney decided they needed to shorten the distance and the way to do that was to "open the island". In the past Pleasure Island was closed during the day and at night it was gated and only those with admission tickets could enter. Those with admission tickets were treated to midnight fireworks and confetti each evening as well as outdoor stages with live bands and shows. There was an air of exclusivity. So the gates were taken away and only those entering the clubs needed a ticket. This led to roving bands of teens hanging around which upset guests. The band stages were removed to eliminate the attractiveness to teens but it also eliminated most live band performances. The exclusivity of Pleasure Island went away.
Posted by Save Pleasure Island at 8:49 PM No comments:

What Is Coming to Pleasure Island?

This article gives artist sketches of what supposedly is coming. Some of the things shown were actually announced months ago and not all of these pertain to PI but to Downtown Disney Marketplace.

What is completely ironic about these new ventures is that none of them apparently go into space currently housing a PI dance club or comedy club. So there seems to be no reason to close any of them at this juncture, based on what has been announced!
Posted by Save Pleasure Island at 8:44 PM No comments:

The Party Is Over at Pleasure Island

On Friday, June 27th the news broke that PI was being closed entirely, except for the few shops. The press announcement was late enough in the day that we have to think Disney didn't want a lot of bad press. But the Disboards website broke the news and the Orlando Sentinel.com posted within minutes. There was a front page article in the Sentinel on Saturday morning:

Rumors that some of Pleasure Island was going to close had been circulating since early this year, if not earlier. The lack of anything new going into the building which formerly housed the Missing Link fast food restaurant (despite a complete gutting and renovations two years ago) followed by this year's closure of the Rock'n'Roll Beach Club kept the rumors churning.

One never knows how credible rumors are but those that seemed most credible had BET closing to become The Adventurers Club Restaurant and Motion closing to become meeting/banquet space. Those same rumors kept 8TRAX and Mannequins open in some form; both were in the same building and shared electrical and HVAC systems. As the most highly-themed dance clubs, it made sense that these would remain even if they were leased out to a third party to operate.

The announcement thus shocked everyone......patrons AND PI employees!
Posted by Save Pleasure Island at 8:22 PM No comments:

WHAT IS PLEASURE ISLAND?

For the past 19 years, Pleasure Island (PI) has been the adult playground for guests at the Walt Disney World Resort near Orlando. Located at Downtown Disney in Lake Buena Vista, Florida, the island has always consisted of various nightclubs along with a limited number of shops and food outlets. When it came to an evening destination for adults traveling without their kids or convention/meeting attendees, Pleasure Island was the leading destination in metropolitan Orlando.

Mannequins: Featuring techno music and one of the world's few revolving dance floors, this club has been operating at PI since the very beginning.

8TRAX: Originally featuring just 70's disco music it has evolved to also include early 80's MTV hits. It has been operating successfully since 1994 when it replaced The Cage which played progressive music. When PI opened, the club was called Videopolis East which played new wave.

BET Soundstage Club: A multi-level club featuring hip hop music and some old school, this club has been operating since 1998 when it replaced the Neon Armadillo country music club.

Motion: The largest dance floor in PI is home to Top 40 videos which by its very nature is a lot of hip hop music and contemporary hits. This club opened in 2001, replacing PI's second attempt at country music called The Wildhorse Saloon. Despite the popularity of country music, neither country venue sold enough drinks to remain in business.

Adventurer's Club: A 1930's style British/South African explorer's club is comedy presented in a most unique setting and manor that I cannot even put into words.

Pleasure Island as a whole opened on May 1, 1989 and is scheduled to close after the evening of September 27, 2008.
Posted by Save Pleasure Island at 9:50 PM No comments: 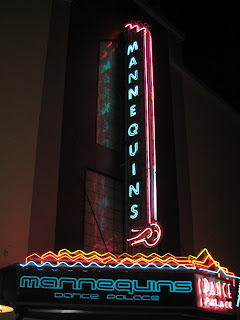 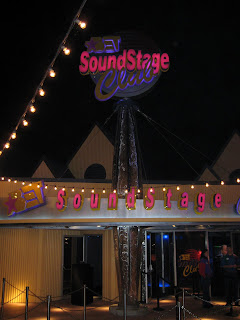 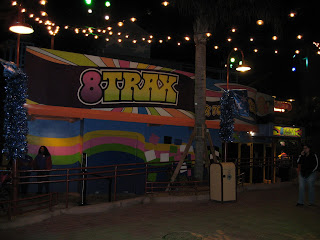 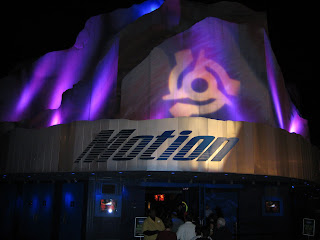 Posted by Save Pleasure Island at 9:42 PM No comments: